From Korea to Merida

About ten years ago we managed a hacienda in the Ruta Puuc called Yunku.  There was a Korean man who ran the state commissary in the attached village.  As time went on we learned that most of the village had ancestors who had immigrated to the Yucatan in 1905 to work in the henequen fields.  Our housekeeper was 1/4 Korean and eventually her two young daughters spent part of their summer vacation from school in Korea studying at the invitation of the Korean government.   Years went buy and I did not think much about this until I heard there was a museum in Merida commemorating the history of the Koreans who immigrated to Yucatan.  Finally this week I went to the museum for a visit.  In about an hour I walked away with a little knowledge and a lot of curiosity.

There was a photo of a man that looked very much like the child of the man named Manuel who has worked with me for the past 13 years.  This man who started working for me when he was 17 was nicknamed Chino.  On a construction site it is normal that all the workers have a nickname.  I showed Manuel the photo and he agreed it looked like his son.  He said his grandfather’s name was Chan and he worked on a hacienda between Telchac and Motul.

I met Mrs. Genny Chan Song who’s grandparents had come on the SS Ilford to Mexico in April of 1905. May 13 they arrived at the port of Progresso Mrs. Chan Song´s Paternal grandfather, Chang and her Maternal grandfather, Song we both one of the 200 orphans who embarked from Korea at the age of 15 and 12. There were 1033 Koreans recruited by a British-Mexican man, John Meyers and his Japanese associate, Genichi Taisho.  At this time there was unrest on the Korean peninsula. The Caste War that ended in 1901 left the native Maya workers dead or unwilling to work on the henequen plantations.  John Meyers promised the Korean recruits a better life in Mexico after he failed to find willing workers in China. They were promised a home and food like their own diet and well paid work.  Instead they were virtually enslaved and ill fed and most were badly indebted to the haciendas once their 4 year contract expired in 1909.

Some of these 1014 immigrants who made it from the port of Chemulpo to the Yucatan escaped across the border to Guatemala.  Mr. Chang escaped but returned 9 years later and worked on the restoration of Chichen Itza.  At the end of the contracted period some of them tried to immigrate to the United States but they were refused visas.  Some left and went to Cuba with dreams of making more money on the sugar plantations.  But most assimilated and stayed on the peninsula.  The Mexican revolution in 1910 and the Japanese occupation of Korea the same year made it impossible for them to return home.  Unwillingly they adopted Spanish names and learned to speak the Mayan language and some, eventually Spanish.  Of the 1033 who left Korea only 135 were women and 196 were children.  Many of the men took Maya wives.  Some left the 22 haciendas and moved to Merida.  Many opened stores in the Santiago neighborhood.  There is a comparative plaque at 57 and 72 where a bar called Chemulpo was one located. 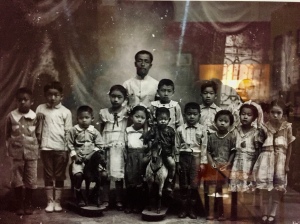 A first generation teacher with his students.

The man on the right was a cousin of the king

a couple descended from the first immigrants