I´m celebrating 2021 my 20th year in Merida. In that time the attention of the international press has transformed this sleepy little town into a must on every one´s bucket list.  It all started with a Christmas visit from David Keeps that produced this Travel+Leisure article a year later.  New York Magazine and Enroute magazine soon follow with a flock of snow birds.  The New York Times and the LA Times came a couple of years later at the height of the real estate boom.  Martha Stewart and Rick Bayless discovered Merida and suddenly Saveur, Food & Wine and the San Francisco Gate feature articles on the Maya cuisine and Departures Magazine calls Merida: Mexico´s Foodie Hotspot!  The fashionistas arrive for a wedding of an editor from W and  then Sarah Ruffin Costello comes and T Magazine call´s me ¨Merida´s social conduit¨.   LA Times comes back to see what the hell is going on as  every other episode House Hunters Intl. is about the Yucatan. The NY Times comes back to see the Yucatan´s Uber-Couple Francesca Bonato and Nicolas Malleville at their home in Valladolid.  In 2014 Joanna Weinberg came for a month in the Yucatan and wrote an article for Conde Nast Travel UK.  She recommended me to write an article for Porter magazine which you can only see by subscription only.  In 2015 Sterling Kelso came back for Travel+Leisure. The new Rizzoli Book Casa Mexico, At Home in Merida and the Yucatan featuring two of our houses photographed by Tim Street-Porter.  Introspective Magazine as well as Vogue and Architectural Digest feature images from the book and our homes. People and Money Magazines recommend visiting Merida in January to save money and see less people, but if you really wanted to avoid tourist you´d come in May when it´s 105F.  On our 15th Anniversary in Merida Condé Nast Traveler published a great article about Merida.

In 2017 Conde Nast Traveler visited Los Colarados the pink salt lagoons near Rio Lagartos and Holbox both great places to visit on your way to or from Merida. Even Vogue thinks you might want to get away from Tulum and if you are moving on from San Miguel de Allende Vogue suggests you try Merida next.  Forbes gave us ten reasons to visit Merida.  In 2018 Conde Nast Traveler goes diving in the underground caves and cenotes of the peninsula.  I was invited to lunch with Jeremiah Tower cooking for PBS and A Moveable Feast on Prime Video.  Here is a beautiful photo essay from The Atlantic of the Yucatan. Samin Nosrat filmed an episode of Salt, Fat, Acid, Heat for her Netflix series.  In 2019 The LA Times strolled through Merida and The New York Times found Merida´s artistic soul.  Wallpaper came to see La Gala one of my precovid hang outs for lunch.  Fodors found joy in aimlessly wandering from trendy bars to trendier speakeasies but the missed the trendiest one.  Monocle was able to find the real speakeasy because they knew who to ask.  I hosted a French TV show 50 Inside when the visited Merida and there is a nice tour of Casa Ermita de Santa Isabel.  In 2019 Merida was Conde Nast Traveler´s number one choice for readers and North America´s second safest city beating out all cities in the USA and only one in Canada was safer.  An old friend from my Paris days came to Yucatan and did a review of the poshest hotels to stay in across the peninsula for Hideaway Report.  He took me to a great lunch and tour of Chable resort.  In 2020 Vogue mentions Villa Los Arcos in it´s review of Photographer Matthieu Salvaing’s new book Interior Voyages from Rizzoli.  Merida is the 3rd friendliest city in the world.  I may have missed a few articles in 2020 as I was very busy watching every program on Netflix and Amazon Prime.  You can check out the Urbano Rentals page on facebook for local press and more articles in Spanish.

Tulum is the reason I moved to the Yucatan.  Escaping the Parisian winter of 1995 I was stuck in a blizzard in NYC.  A friend suggested we head down to Tulum for a week.  The first 3 days were some of the most stressful of my life.  I had a fashion business to run in…

END_OF_DOCUMENT_TOKEN_TO_BE_REPLACED 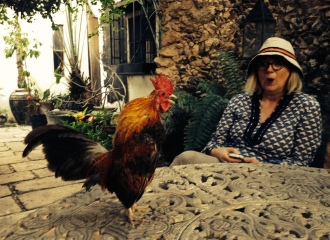 Casa Mexico at home in Merida and the Yucatan by the venerable photographer Tim Street-Porter and his ever charming ever clever wife, the writer Annie Kelly seems to have riled up the expat community to the point of writing hateful reviews on Amazon.  Oh well Vogue magazine seems to love the Josue Ramos house…

END_OF_DOCUMENT_TOKEN_TO_BE_REPLACED

¨It’s approaching midnight and Genoveva de la Peña, an art teacher turned bee conservationist, is making a toast. “Each of you has been special for me in a lot of ways, and right now it’s important to choose with whom you share your life,” she says, raising a glass of red wine to the mishmash of…